Shohei Ueki is a church planter and associate pastor at Kizuna Church in Chiba, Japan. Shohei was born in 1979 and raised in Saitama Prefecture, the suburban area of Tokyo. He devoted his high school and college time for long distance running. Shohei attended the University of Tsukuba and received a bachelor degree in Kinesiology and Physical Education.

After serving as a Physical Education teacher at Christian elementary school in Tokyo, God called Shohei and his family to the seminary education at Christ Bible Seminary and received Master of Divinity (M. Div.) degree in 2011. After the graduation of seminary, Shohei served as a Christ Bible Seminary/Christ Bible Institute as a director of Admission and Academic Affairs.

In 2015, Shohei and his family moved to the Unites States and started his second seminary education at Gordon-Conwell Theological Seminary in Massachusetts. In January 2017, Shohei finished his degree and received Master of Theology (Th.M.) in preaching.

Sawako was born and raised in Shizuoka Prefecture, surrounded by the beautiful green tea field and magnificent scenery of Mt. Fuji. Sawako graduated the University of Tsukuba and received bachelor degree in Human Science and Disability science.

Shohei and Sawako met during college time and married in 2002. Now they have four kids, three boys and a girl (John, Jay, Yuzuri, and Joe). 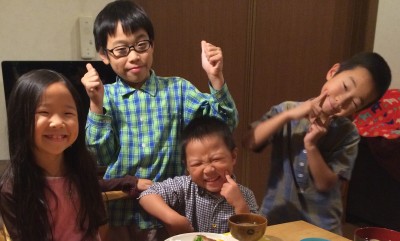 Shohei and Sawako are both raised in Christian families. Shohei is fourth generation Japanese-Christian, since the year of 1902, and Sawako is the second generation. This is very rare in the nations of the 2nd largest unreached people group in the world, 0.3% of the Christian population. Both Shohei and Sawako believe that this is nothing but God’s grace and mercy.